Source: The Globe and Mail

​
​A simple question, one of dozens – “Was your child immunized against measles?” – went through a series of steps. First, the question was input to a smartphone app, which translated the question for the patient in Arabic. The father, with limited Arabic knowledge, answered as best he could. The app translated it to English, and finally, the resident on hand could input the answer.

With more than 26,000 refugees already in the country, the potential bottleneck of casework for health-care providers is huge, and there is no easy way to integrate newcomers with already strained resources. It presents the kind of time crunch that clinics can’t afford in the long term, especially in cities where the demand for interpreters outstrips their numbers. 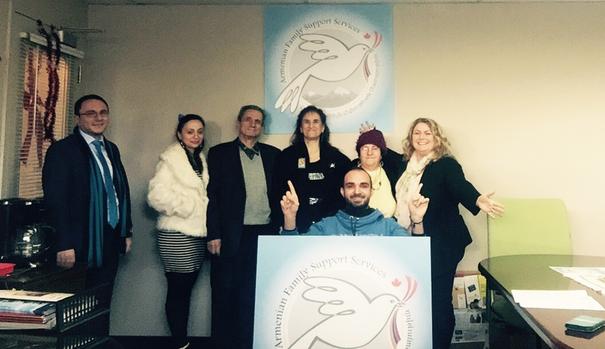 Stay connected with us

​You will be transferred to a secure website for payment processing

A family birthday celebration turned into the ultimate gift of giving.  A prominent Toronto family recently donated $3000 anonymously to AFSS by telling all the birthday guests that their gift was going to be handed over to AFSS!  What a wonderful way to celebrate our lives of privilege and abundance by giving to those who have lost everything!  Thank you to our generous donors and to all those who continue to keep Armenian Family Support Services in their minds and hearts!

One Life - One Story: Our Syrian Armenian Refugee - Pierre

It has been a year that Armenian Family Support Services (AFSS) of the Holy Trinity Armenian Church has earned the privilege of being a Sponsorship Agreement Holder (SAH) under the Private Sponsorship of Refugees Program with Immigration, Refugees and Citizenship Canada (IRCC). This means that AFSS can process refugee cases with private sponsors here in Canada.

Due to Syrian conflicts, more and more refugees are now residing in Lebanon, Jordan and Turkey. The “lucky” layer of these refugees are the ones who can locate family members, friends or acquaintances here in Canada that are willing to sponsor them financially for their first year in Canada. There is a larger and growing second layer of refugees who do not have anyone in Canada. We are receiving constant phone calls and e-mails begging for help.

Hearing all of these traumatic stories of Syrian-Armenian refugees without sponsors is extremely difficult. It is equally difficult when we are unable to locate sponsors for these families. We encourage these individuals to search the Internet and Facebook for a chance to find a family member, neighbour, or classmate that lives in Canada.

In August 2015, the AFSS participated in a Canada-wide teleconference with all Sponsorship Agreement Holders in Canada. We presented the concern of so many vulnerable Syrian Armenian refugees who do not have any sponsors in Canada and provided several cases. A few days later, we received an e-mail from the Kingston Anglican Church SAH, stating that they would like to take on a couple of cases and become their sponsors. This was a great evolution and the beginning of a great collaboration.

A young man by the name of “Pierre” had called us and provided a background of his story. He was an artist hairdresser in Aleppo, Syria as well as a university student in Hotel Management. Due to the Syrian conflict , he was harassed and threatened, that he cannot touch women’s hair, otherwise he will lose both his hands. For his safety, his parents decided to send him to Lebanon, where he took a “survival job” cleaning buildings. Later he also got a low paying job of fixing wigs for cancer patients.

Very quickly we prepared the required documents and shared them with the Kingston Anglican Church SAH. When Pierre was told about the application to sponsor him, he was so happy and became emotional, saying, “This seems like a fairy tale.” The fairy tale began when he arrived to Canada. We greeted him in Toronto, and shortly after, he took another flight to Kingston. In Kingston he has eight  families looking after him. These families are all teaching at Queens University.

He came to Toronto and attended our Armenian Christmas celebration on January 6th, 2016 at the Holy Trinity Armenian Church. The church community welcomed him and he made many new friends.

In conversation, Pierre states he feels safe, has a chance to manage his life and believe in his dreams. In Syria, he did not have any hope for a future because his life on a daily basis was being threatened. Pierre calls his sponsors “tantik”, which he explained to them means aunt in Armenian. He feels that he has gained a new family both here in Toronto and Kingston.

After a couple of weeks in Canada, he was hired as an apprentice at a reputable hair salon and has also enrolled in English language classes.

Upon receiving the exciting news of getting a job, who did he call first? Of course, AFSS was the first one to know. This is just one of the success stories of our fearless refugees. After mastering the English language, he is planning to continue his education at Queen’s University. We are proud of Pierre to achieve such milestones.

We will continue our mission of providing our refugees the right of living without fear and allowing them to have plans for a bright future. They deserve to gain back their lives with dignity.

To learn more about how to become a sponsor for Syrian refugees, please visit our website at www.afsstoronto.org or contact our office at 416-431-5549.

A Big Thank You

On Sunday February 21st, AFSS had a delightful visit from Mr. Murat Nisan.  Over the past few weeks, Mr. Nisan had been talking to several people and organizations about our mission in sponsoring and helping Syrian Armenians. It didn’t take Mr. Nisan long to capture our community’s compassion.  So far he has gathered donations in the amount of $4,750 for Armenian Family Support Services -  a portion of which is donated by the Knights of Vartan, Toronto.

This money will go towards sustaining AFSS operations as we are supported strictly by the generosity of our community. Thank you to Mr. Murat Nisan for this inspirational act and to all the donors for their generous participation. Mr. Nisan continues to be an AFSS fundraising ambassador.

For more information on how you can help our cause click here. 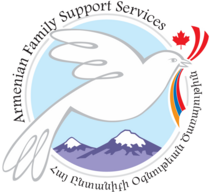 The Armenian Family Support Services (AFSS) and Holy Trinity Armenian Church hosted an ‘Open House and Information Session’ addressing the need for community support as they are preparing for refugee settlement of Syrian-Armenians to Canada.  The AFSS is a Sponsorship Agreement Holder (SAH) through the Private Sponsorship Program with Citizenship and Immigration Canada (CIC) and is currently accepting applications for refugee sponsorship. The information session provided participants with an overview of the Sponsorship Program, a history of the AFSS programs and current commitment to help Syrian refugees with settlement in Canada. Special guests included His Grace Bishop Abgar Hovakimian, Primate of the Canadian Diocese of the Armenian Apostolic Church and Mr. Yosief Araya, Manager, Refugee Sponsorship Training Program, Catholic Crosscultural Services.

With a full house, Ms Rita Odjaghian, Chairperson of the AFSS and the Refugee/Settlement welcomed everyone and facilitated the afternoon presentation. Rev. Archpriest Fr. Zareh Zargarian, Pastor of the Holy Trinity Armenian Church, opened the information session by expressing his gratitude to the AFSS and the church community for coming together during this time to help our fellow brothers and sisters. Maida Icliates, former Chair of AFSS and founder, spoke about the beginnings of the AFSS, the support from Father Zareh Zargarian to make this “seed of hope” of AFSS become a reality and celebrate its 11th year of helping our community. Mr. Yosief Araya, Manager of Refugee Sponsorship Training Program, reviewed the Private Sponsorship Program and the responsibilities of each SAH organization. His Grace Bishop Abkar Hovakimian, Primate of the Armenian Church, Canadian Diocese provided the closing remarks which conveyed a sense of gratitude and responsibility as a community to come together. He spoke of the humanitarian efforts of Hay Doun in Montreal, sister office to the AFSS, and their settlement of over 600 families in Montreal.

There was a question and answer period followed by participants enjoying coffee and desserts as they joined together to discuss how they can get involved and give a helping hand to Syrian-Armenian refugees that will be arriving in Toronto.  The information session was presented in both English and Armenian. This was an important opportunity to explain to our community the various ways they can volunteer their time and make a difference, including meet and greet at airports, introduction into the community, and assistance with networking and job search. The presentation captured the attention of the audience, which prompted many interesting questions and ideas.
Armenian Family Support Services (AFSS) is a non-profit community organization whose mission is to provide emergency support, settlement, and employment and referral services in the Greater Toronto Area. We are committed to enabling individuals to fully integrate, participate in and contribute to civil society. Our activities are guided by our core values of respect, dignity and cultural sensitivity. For more information please visit our website at www.afsstoronto.org , email at contactus@afsstoronto.ca or telephone at 416-431-5549.